Jojoba oil is used in cosmetics for its regulating and nourishing properties. It has a composition similar to that of the skin's sebum and is recommended in particular for the care of oily and combination skin. Fluid and easy to apply, it is easily absorbed and does not leave a greasy film on the skin. Lastly, it is also indicated for oily and brittle hair.

Native to Arizona and Mexico, the Jojoba is also called "wild hazel". It is a shrub whose foliage resembles that of the olive tree. Its common name "jojoba" comes from an old Mexican word "chohobba",  which referred to a beverage containing extracts of this plant used by Indian wizards to predict harvests. The Jojoba produces a capsule-shaped fruit that contains seeds from which Jojoba wax and oil are extracted.  For centuries, Native Americans have been using Jojoba oil to protect their skin from dehydration and soothe irritation. 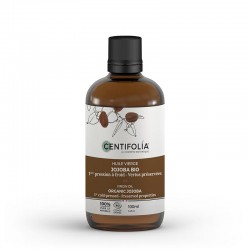